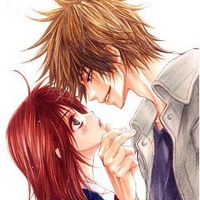 Before he died, Kurebayashi Teru’s brother gave her only a cell phone, telling her to contact “Daisy” if she ever needs someone to talk to. Now, even though she lives alone and without relatives, Teru never feels lonely because Daisy is her constant confidant and supporter.

In order to pay off a debt, Teru finds herself needing to work for the rude, inconsiderate, and abusive (not to mention quite handsome) school janitor, Kurosaki Tasuku. While her predicament seems on the opposite spectrum of her relationship with Daisy, maybe Teru’s two different worlds are more closely connected than she thought?