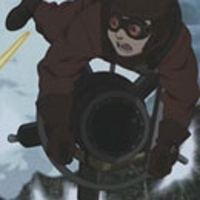 As London prepares for the first World Expo, the young Ray Steam receives a package containing the Steam Ball, a small and incredibly powerful engine containing hyper-pressurized steam. Developed by Ray’s father and grandfather in America under the supervision of (and funded by) the O’Hara Foundation, the Steam Ball could prove to be an asset to civilization or a great danger. But after Ray finds out that the Steam Ball must not fall into the O’Hara Foundation’s hands, he sets forth on a mission to keep the item safe and away from those who would use it to fuel a brutal war…

In 1863, where an alternate nineteenth century Europe has made tremendous strides in steam-powered technologies, scientist Lloyd Steam and his son Edward have succeeded, after a lengthy expedition, in discovering a pure mineral water. They believe the water can be harnessed as an ultimate power source for steam engines (the main industrial engine of the time). An experiment in Russian Alaska goes terribly wrong, with Edward being engulfed in freezing gases, but results in the creation of a strange spherical apparatus. Three years later, back in England, Edward’s son, Ray Steam, is an avid young inventor who works at a textile mill in Manchester as a maintenance boy, often working on a personal steam-powered monowheel at home. While he usually lives alone with his mother, his friend Emma and her brother Thomas have recently been sent over to stay until their mother returns from a business trip. Ray’s life is suddenly disrupted by the arrival of a package from his grandfather Lloyd; the metallic ball seen earlier, along with its schematics and a letter instructing him to guard it. Then, Alfred and Jason, two members from a company called “The O’Hara Foundation” arrive and attempt to steal the ball, but Lloyd appears just in time to distract them, allowing Ray to escape with the package. With Emma’s help, he manages to activate his monowheel as more agents, operating a large steam automotive, give chase, succeeding in thwarting it on a railway line by putting it in the way of an incoming train. By coincidence, Robert Stephenson, who was the intended recipient of the Steam Ball, was on his way to Manchester to meet with the elder Dr. Steam, and happens to be on the train. However, as the train approaches the station, a zeppelin carrying Alfred descends over their compartment and kidnaps Ray, taking the ball with them. Arriving in London, sometime prior to the 1866 Great Exhibition, during a small dining session Ray meets Scarlett O’Hara, the spoiled granddaughter of the Foundation’s head chairman; Archibald Simon, an administrator of the company; and finally his father Edward, who has been partially mechanized for his severe injuries from the Alaskan experiment. He promptly takes Ray (and an insistent Scarlett) on a tour of the “Steam Castle”; an elaborate facility run by an army of engineers, and entirely powered by the compressed gas in three “Steam Balls”, one of which was the one sent to Ray. He is enamored both by the castle, and his father’s vision of using it to enlighten mankind. Ray is then quickly recruited to help complete the castle, and begins developing a love/hate friendship with Scarlett, who has become attracted to him. Ray later encounters Lloyd again, who has escaped from his cell in the castle and is attempting to sabotage it from within, knowing that Eddie’s intentions for it were evil. The Foundation’s true intentions for the exhibition is to sell weapons to Britain’s enemies. Upon discovering an arsenal of war machines in its underbelly, Ray struggles with the moral dichotomy of being a scientist; of how to contribute to the world without giving into vanity, conveying his conflict towards his father, and the one brewing between Eddie and Lloyd. The two eventually reach the core section of the castle, and manage to pry away one of the steam balls before security surrounds them. Lloyd is shot by Alfred and recaptured, while Ray makes another elaborate escape with the ball. The next morning, the exhibition is underway, and Ray has reunited with Robert Stephenson, giving him the ball and the knowledge he acquired in captivity. An assault on the castle is then met with a demonstration by the Foundation of its new steam-powered weapons, which turn the exhibition into a war zone. Ray becomes aware of his folly when Stephenson uses the ball to enhance his own company’s battle tanks (which resemble the real-life Hornsby Chain Tractor of 1905), leading him to realize that he had no better intentions than the Foundation’s. Eddie, eager to show the world the castle, enters the observation/control room and orders the engineers to “launch” it, causing the structure to rise and shed its decorative outer shell, revealing a monstrous floating fortress, the steam generated by the structure’s gigantic propulsion jets flooding the city and freezing everything in its path. Ray steals the ball again to create a makeshift rocket vehicle, and attempts to gain entry as the British Royal Navy attempts in vain to shoot it down. Scarlett has since become worried about Ray, and has found herself trapped in the castle whilst searching for him. She is in the control room with Eddie as Ray arrives, and Lloyd (having escaped again) confronts Eddie about his actions before shooting him with a stolen gun, and having his body disappear in a cloud of steam. With the castle steered off course from the battle, the structure has become unstable and threatens to explode over the city. Lloyd and Ray rush to redirect the castle over the Thames, defeating Alfred who is controlling a pair of gigantic construction claws in the process. At the last minute Eddie, whose metal body repelled the gunshot, appears alive and decides to lend a hand. Ray reinstalls the stolen steam ball, and makes his way to the control room to make a final escape with Scarlett on an emergency jet pack, while Eddie and Lloyd halt the machine over the Thames and leave as well. The castle eventually detonates in a spectacular explosion, sparing the city of most of the destruction. The ending montage reveals Ray returning home, and later becoming a global superhero (aka Steamboy) using the jet pack gear from the castle; his grandfather Lloyd introducing Ray to electricity and finally passing away; the Great War is fought with paratroopers and zeppelins; his father Eddie founding a corporate conglomerate; and Scarlett maturing and becoming a famous pilot.