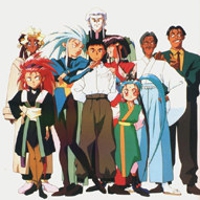 Tenchi Masaki was a normal 17-year old boy until the day he accidentally releases the space pirate, Ryoko from a cave she was sealed in 700 years ago as the people thought she was a demon. In a series of events, four other alien girls show up at the Masaki household as Tenchi learns much of his heritage he never knew about and deal with five alien girls who each have some sort of romantic interest in him.