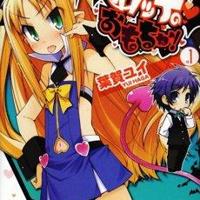 In the medieval fantasy world of Álfheimr, succubus princess Astarotte Ygvar, the first princess of the kingdom of Ygvarland (???? Yuguvarurando?), has just reached the age of 10. For the coming years of a young succubus’ life, it is necessary for them to have a male harem. In order to maintain their body and preserve their beautiful appearance, they must consume a substance only found on males. This substance is a liquid called Sauzfryma, better known as semen. The princess, however, bears a great dislike against men, and only agrees to create a harem if a human male is to join, as human males are said to be impossible to find. However, her followers are somehow able to find a human male named Naoya Tohara who, along with his daughter Asuha, is brought to the demon world to be part of Astarotte’s harem.