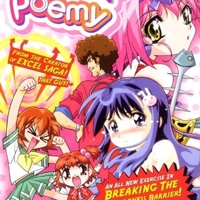 Puni Puni Poemy is a two-part original video animation spin-off from the Excel Saga manga and TV animation. It features some of that series’ secondary characters and many of its staff, primarily director Shinichi Watanabe. Like Excel Saga, it is a parody of other anime, manga and various aspects of popular culture, though in this case with the magical girl genre providing its primary focus and general structure. The series was originally an in-joke from an episode of Excel Saga; Watanabe decided to take the in-joke to its most extreme logical conclusion, creating the series.

Puni was banned in New Zealand in December 2004, on the grounds that it “tends to promote and support the exploitation of children and young persons for sexual purposes, and to a lesser extent, the use of sexual coercion to compel persons to submit to sexual conduct.” A New Zealand anime fan, Simon Brady, applied to have the decision reviewed using the basis that the show was only rated MA15+ (under 15s require guardian) in neighbouring country Australia and that it does not exploit its children characters within the work, but in June 2005 the review authority reached a similar conclusion about the show’s legal status.