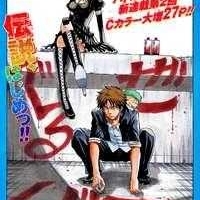 The strong delinquent Oga (nicknamed Ogre, Demon, or “it’d be alright if he’d just die” by other delinquents) picks up a baby that turns out to be the son of the Great Demon King! Chosen to raise the baby until he’s in age of destroying mankind, together with the demon maid Hilda, they’re sure to make mankind die… of laughter!

The story follows his life with the child and at the delinquent school. Oga attempts to “pass on” baby beel to other students at Ishiyama. If Oga can find someone more evil and stronger than him, Baby Beel will attach to that person instead of Oga. After subsequently fighting and defeating all members of the T?h?shinki and in the process, destroying Ishiyama High itself, Oga and company are transferred to Saint Ishiyama Academy, which appears to be a direct opposite of the delinquent school – and it’s there the real story begins.