Voices of a Distant Star [Movie] 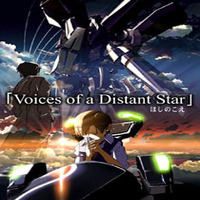 A middle-school girl named Mikako Nagamine is recruited to the UN Space Army in a war against a group of aliens called the Tarsians, named after the Martian region where they were first encountered. As a Special Agent, Mikako pilots a Tracer, a giant robotic mecha as part of a fighting squadron attached to the spacecraft carrier Lysithea.