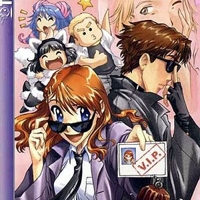 Dramacon focuses on Christie Leroux, a fledgling teenage writer who is debuting her manga with her artist boyfriend, Derek Hollman, at her first anime convention. Christie endures Derek ignoring her along with the culture shock of men in schoolgirl uniforms. During the three-day convention, Christie meets Lida Zeff, famous manga artist and writer, who gives her advice on improving her manga, and Matt Green, a mysterious sun-glass wearing cosplayer, whom she develops feelings for. Matt always wears sunglasses to conceal the fact that his eye is missing. Derek witnesses Matt and Christie kissing, and confronts her while drunk. During the argument, he attacks and attempts to rape her; however, she escapes to Matt’s room, which leads Derek and Matt to fight. Christie spends her last day with Matt, his sister Sandra, and Greta, a friend of theirs. They have to wait another whole year before they see each other again since Christie is still in high school and lives on the east coast while Matt lives on the west coast and attends college.

A year later, Christie returns to the convention with Bethany, a new artist. Christie discovers that Matt now has a girlfriend named Emily. While Christie deals with her feelings for Matt, Bethany faces off with a disgruntled manga purist and is offered a job at Mangapop. Lida Zeff helps the two girls with advice for Bethany about living in a manga publishing world. Emily pulls off Matt’s sunglasses in public and when Christie runs after him, Matt tells her to “piss off”. The next day, Christie runs away from him when he tries to apologize, and refuses his kiss. They part without a good-bye. Bethany and Christie leave the convention with a promise to cosplay the next year and to continue to work hard on their manga.

At the next convention, Christie meets up with Matt, but her friends follow her, and she constantly argues with Matt. She runs into Derek, which brings back the memories of him attacking her, but sees that he now has a pregnant fiancée. Matt and Christie try to control their tempers, Matt in particularly trying to hold his biting retorts, and they seem to have made up, even with Emily still around and finding ways to break into their dates as a form of payback for last year. Meanwhile, Bethany refuses to cosplay after learning that her mother is coming to the convention. She argues with her mother about her career choice; after her mom is in a car accident, Beth leaves the convention to be by her side in the hospital and they reconcile. Bethany has her blessing to pursue a job with Mangapop. Christie and company all leave the convention considerably happier than last year.