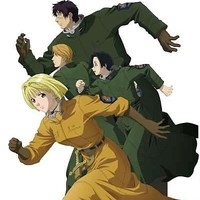 After a long war with the Republic of Frost, the Empire abruptly signs a cease-fire, ending the war. Three years later, the Empire is in ruins with starvation and plauge. Former soldiers have become bandits. Former Anti-Tank Trooper, Randel Orlando, unexpectedly runs into and joins the Pumpkin Scissors platoon, an Imperial Army relief effort led by Alice L. Malvin to restore order to the war-torn Empire.