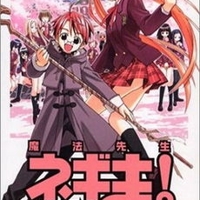 Negi Springfield is a ten-year-old wizard from Wales, who dreams of becoming a Magister Magi (Approximate Latin translation: “Master of Magic”), a special wizard who uses his powers to help normal people, using covers such as working for NGOs.

Negi’s reason for becoming a Magister Magi is to find his father, Nagi Springfield, the legendary mage also known as the “Thousand Master”, who is believed to be dead.

After graduating from the Merdiana Magic Academy in Wales, Negi is given a duty as a cover in the real world, and training, before he actually becomes a Magister Magi. That duty is to become an English teacher at Mahora Academy in Japan. The task will not be easy, however, as Negi will become a teacher to a Middle School class of 31 older girls, each very special in her own way. The series details his time and adventures in Japan as he gains acceptance and respect from his students, helps them in their problems, and faces magical threats from inside and outside Mahora Academy. Although each of the girls has her own back story and personality, Negi’s main relationship is with Asuna Kagurazaka, his student and roommate, who dislikes him initially but later accepts him as a friend and becomes his partner, helping find clues about his father and his life.