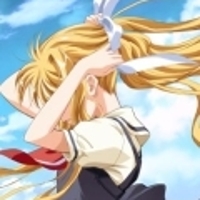 “Once upon a time, there was a princess with wings. She lived alone, and had no friends.”

In a small town, bounded by the sea and sky, there is a story handed down from ages past. It was a sad love story of a princess with wings and a young man who guarded her.

The princess was confined for her supposed powers, and she had never seen the outside world. She heard that she had a mother far away, but she could not go in search of her. One day, a man appeared. He talked about the world outside and amused her. Gradually, they fell in love. However, if she were to love a man, a curse would befall her.

Kamio Misuzu identifies herself with the princess. As she often falls ill, she doesn’t go to school often and she is always alone. She hasn’t even been out of the town. However, she thinks she might have an encounter like the princess’ in the future. One day, a young man came before her. His name is Kunisaki Yukito. He is traveling around showing a puppet play. He has a dispensation from his late mother, to save a girl in the air.

A cursed princess and her guard. A girl who identifies herself with the princess and a young man who travels to save a girl in the air. Two stories of the past and the present intersects each other, and their feelings transcend the boundaries of time. What endings will be waiting for them?