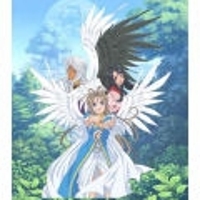 So, now that Morisato Keiichi and Belldandy have managed to save the world from destruction, the two of them should be able to live together happily ever after, right?

Unfortunately for Keiichi, his luck just isn’t that good. For one thing, Urd and Skuld are both still living with him and Belldandy. Their constant fights makes peace a rare commodity and time alone with Belldandy rarer still. In addition, as If the situation wasn’t complicated enough, Heaven has decided to grant Keiichi the services of yet another goddess, Peorth, who isn’t on the best of terms with Belldandy. The chaos generated by having four goddesses under the same roof makes all the other little things in life pale by comparison. Little things such as the return of Marler and God calling to say that Yggdrasil had lost the record of the original contract between Keiichi and Belldandy.