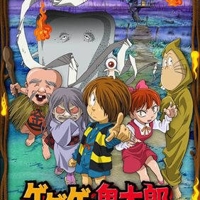 GeGeGe no Kitarō focuses on the young Kitarō—the last survivor of the Ghost Tribe—and his adventures with other ghouls and strange creatures of Japanese mythology. Along with: the remains of his father, Medama-Oyaji (a mummified Ghost tribesman reincarnated to inhabit his old eyeball); Nezumi-Otoko (the rat-man); Neko-Musume (the cat-girl); and a host of other folkloric creatures, Kitarō strives to unite the worlds of humans and Yōkai.

Many storylines involve Kitarō facing off with myriad monsters from other countries, such as the Chinese vampire Yasha, the Transylvanian Dracula IV, and other such non-Japanese creations. In addition to this, Kitarō also locks heads with various malevolent Yōkai who threaten the balance between the Japanese creatures and humans.

Anime Rating
9.1/10
54 users rated this.
Similar in these categories.

Koutetsujou no Kabaneri
Watched By