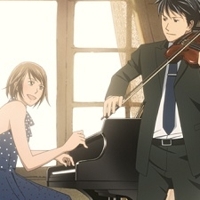 A first class musician name Shinichi Chiaki whose dream is to play among the greatest in Europe. He came from a notable family, he is known to be a perfectionist—not only is he highly critical of himself, but of others as well. Shinichi didn’t proceed in flying to Europe because of his fear of flying. Therefore, he’s grounded in Japan.
He enrolled at Japan’s top university, during his senior year, Shinichi happens to meet Megumi Noda a.k.a. Nodame. At first glance, she looks to be a shaggy girl with no goal in life. Nonetheless, Shinichi heard Nodame played the piano for the first time he was struck in awe of the kind of music she produces. Still, knowing that Nodame is his neighbor and fell in love with him Shinichi got dismayed.

Nodame Cantabile is created by Tomoko Ninomiya. The series depicts the relationship between two aspiring classical musicians, Megumi “Nodame” Noda and Shinichi Chiaki, as university students and after graduation.

Episode 1: Lesson 1
Chiaki was about to give up his dream of becoming a conductor. His despair affects his playing, and he is transferred to a different teacher, Hajime Tanioka, who specializes in failing students, until he met a girl who proclaimed herself as “Nodame.”

Episode 2: Lesson 2
When Chiaki quits as the violinist of Ryutaro Mine, Mine is at the peak of quitting classical music for rock music. Mine, a violinist, was desperately searching for a pianist to perform with him, until he saw Nodame. He didn’t know that his troubles were going to begin when he chose her as a partner.

Episode 3: Lesson 3
One of Chiaki’s many admirers named Masumi Okuyama, got really jealous of Nodame’s affection with Chiaki. He started irritating her with random pranks to get revenge. To resolve their rivalry, Nodame and Masumi decide to have a contest, the winner will get Chiaki to go on a date with them on Christmas Eve.

Episode 4: Lesson 4
A foreigner named Maestro Franz von Stresemann comes to school that became friends with Nodame. Chiake felt a bit uneasy with that foreigner. But later on he discovered that it was the famous Stresemann, He tried and tried to ask him to be his teacher until it was accepted.

Episode 5: Lesson 5
Chiaki was persuaded by Nodame to conduct the S orchestra, due to Stresemann was knocked out cold from too much alcohol last night. As the rehearsal failed to synchronize, Stresemann wakes up and takes control, demonstrating everything Chiaki failed to do. Chiaki ended doing the rehearsals he didn’t know before.

Episode 6: Lesson 6
Stresemann is always too busy for the S orchestra rehearsal; Chiaki took control and conducted instead of Stresemann. Afterwhile Stresemann quits conducting the S orchestra in vengeance to Chiaki; he plans to humiliate him and his crew. Chiaki takes up the challenge of conducting before a live audience and prepares for his and the S orchestra’s debut.

Episode 7: Lesson 7
Communication breaks down with the S orchestra. Nodame and Chiaki must inspire the musicians in time to perform. With help from Nodame, Chiaki finally realizes the true reason for the S orchestra. Just in time for the performance, he manages to help them enough to impress the audience in an unorthodox way.

Episode 8: Lesson 8
Chiaki stopped conducting the S orchestra because he was asked to do so to play a solo piano of Piano Concerto No. 2 by Sergei Rachmaninoff, a very tricky piece. Chiaki finds out that Stresemann’s ex-lover, a member of the school board, and she was the one to ask Stresemann to teach Chiaki.

Episode 9: Lesson 9
Chiaki, Nodame, Mine, and Masumi were sent by Stresemann to a music festival to get better at playing. Stresemann was too tired so Chiaki is forced to conduct the orchestra. Nodame was yelled at by her teacher for lacking motivation. Nodame masters the piece she’s supposed to play.

Episode 10: Lesson 10
In the School Festival the S orchestra has to perform without Chiaki because he has no time to spare in practicing for his performance with the A orchestra. Chiaki notices there was something missing from the S orchestra, but Stresemann tells him to forget it and just focus for his difficult performance.

Episode 11: Lesson 11
Chiaki, Stresemann, and the A orchestra performed a heart touching performance that brought the audiences to tears including the skeptical journalist. Which inspired Nodame to do her best like Chiaki did. Saiko realizes that her relationship with Chiaki is totally over.

Episode 12: Lesson 12
Nodame convinces Chiaki to perform Rachmaninoff on two pianos and they successfully attracted a group of audience, including Saito and Etou sensei. While all the 4th year S orchestra members reminisce about their time with Chiaki and the rest of the group as graduation looms around the corner.

Episode 13: Lesson 13
The graduation day has come and the students put on one final performance. Kiyori, the former concert mistress asks Chiaki about starting up another orchestra with him as the conductor. The S orchestra has one final get together before they go their separate ways.

Episode 14: Lesson 14
Everyone partied all night and got drunk, while Chiaki stayed the night at Nodame’s House. Nodame was mistakenly identified as Chiaki’s girlfriend by his Grandfather and was ordered to play. Nodame convinces Chiaki to play the piano with her.

Episode 15: Lesson 15
Chiaki and Nodame played and enchanted everyone with the music they produce. It convinces Chiaki’s family to let him focus more on studying music instead of family business. Nodame was transferred to Etou sensei, a strict instructor that hits people with a paper fan.

Episode 16: Lesson 16
The new orchestra starts rehearsing, and Nodame finally comes to an agreement with her new teacher.

Episode 17: Lesson 17
Most of the orchestra members are distracted during the competitions they joined, so rehearsals are put on hold until the contests end. Nodame finally practices with her new teacher.

Episode 19: Lesson 19
Nodame plans to see Chiaki and hypnotize him the watch Milch gave her, to remove Chiaki’s fear of flying.

Episode 20: Lesson 20
Chiaki’s orchestra, also known as the R-S orchestra, gets more and more famous. Nodame, spent most of her time in practice, and enters a piano competition and starts to advance through the preliminaries.

Episode 21: Lesson 21
Nodame makes it to the final round, but she got stick due to lack of sleep. She struggles in memorizing the final piece, as she runs to a boy from her childhood that brought up all of her bad memories of playing the piano.

Episode 22: Lesson 22
Nodame failed to memorize the final piece due to the bad memories she had during childhood, she exits the competition, but Chiaki saw her and asked her to go with him in Europe. Chiaki still did not inform the R-S orchestra about his leave.

Episode 23: Lesson 23
Chiaki performed his final performance with the R-S orchestra; he reminisced the times on how he got there. But with Nodame away, he wants to find her and convince her to come with him to Europe. When he finally finds her, the two hugged each other by the riverside and her father saw them.