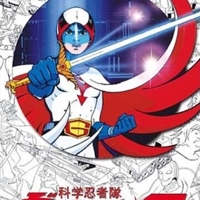 In the distant future, Earth is threatened by Gallactor, a vicious organization that combines terrorist tactics with advanced scientific knowledge in an attempt to take over the world. The only thing standing in Gallactor’s way is the International Science Organization (the ISO for short) and its chief scientist, Professor Kozaburou Nambu. Dr. Nambu uses all the ISO’s resources in a “war of information” against Gallactor, but his primary weapon is his pet secret project: five young people who comprise the Kagaku Ninjatai (“Science Ninja Squad”).

Note regarding the english version (Battle of the Planets) and any version based on it
The Edited US version by Sandy Frank Productioion cut out huge chunks of the original animation, and rewrote the plots.
To fill in the time they cut from the originals, Sandy Frank Productions added 7-Zark-7, 1-Rover-1, the flight to Spectra, and the rec room the team hung out in when they weren’t off saving the galaxy.
also see: http://chronicsite.com/gatchaman/eplist.html