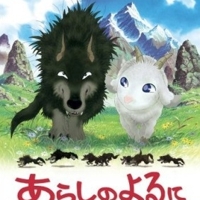 “Stormy Night” is based on Yuichi Kimura’s extraordinary best-selling picture books, which has won loyal followers from kindergarteners to grandparents. Gisaburo Sugii, whose major credits include “Night on the Milky Way Railroad” and “Touch” directs this animated film.

Gav and Mei, a wolf and a goat, meet by chance, developing a friendship that transcends the natural enmity between predator and prey. Gav is tormented by his literally “wolfish” instincts and Mei only compounds his troubles. Mei’s flock and Gav’s pack hover in the background poised to tear the two apart.