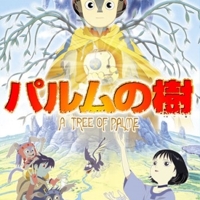 Ever since the death of his mistress Xian, Palme – a robot made of a mystic wood that is said to absorb the very memories of the civilisations it roots in – has lain dormant, with no reason to live. One day, he awakens to the presence of a wounded female warrior named Koram, whom he mistakes for Xian. Koram is forced to entrust her mission to him to bring the Egg of Touto, a mysterious artifact, to Tamas, the world below. On his journey, Palme meets Popo, a girl with whom he eventually falls in love. Determined at last with a purpose in life, and learning of the importance of the artifact he carries, Palme resolves to complete his mission and exchange the artifact to the Tree of Life for his humanity. But, the Tree and others have darker purposes for the artefact – and, certain that the completion of Palme’s mission would destroy the world, the people of Tamas would do anything to stop him.