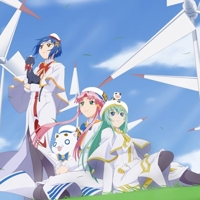 Based on the seinen mangas Aria and Aqua by Amano Kozue.

Aqua and Aria take place in the twenty-fourth century, on the planet Aqua (formerly Mars), which has been terraformed into a habitable planet covered in oceans and seas.

The series is the story of Akari, an apprentice gondolier with Aria Company, one of the three most popular gondola companies in the city. She is training to become a full-time gondolier, or undine, as they are called in Neo-Venezia.