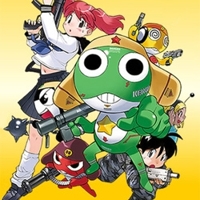 In an attempt to establish a secret base to prepare for the coming Keron invasion, Sergeant Keroro infiltrates the home of the unsuspecting Hinata family. However, he is immediately overpowered by two children, forcing him to reveal his true identity. With his weapon the Kero Ball taken away from him, Keroro is defeated and made servant by the Hinata family. Meanwhile, the Keron Army abandons him on Earth. Keroro must now carry on his mission alone, while complying with the household chores imposed by the Hinata family.

Follow Sergeant Keroro and his platoon’s adventure, as they try to conquer planet Earth!

Keroro Gunsuo, also known as Sgt. Frog, is an anime adaptation of the comedy manga series under the same name, written by Mine Yoshizaki. Produced by studio Sunrise, the series aired a total of 381 episodes (divided into 8 seasons) between April 3, 2004 and September 6, 2014.

The Keroro Platoon
Unlike the other Keron armies that have around 30 to 40 soldiers, the Keroro Platoon only has 5 members. Their initial mission was to survey planet Earth and convey the information to the waiting Keron Invasion Army. However, after a failed infiltration of the Hinata household, Keroro is captured by the Hinata children and his weapon Kero Ball is taken away. Losing their cover, the Keron Invasion Army declares that the campaign is a failure and immediately leaves Earth.

Keroro
Keroro, also known as Sergeant Keroro, is the leader of the Keroro Platoon. He has a green skin, he wears a star on his belly, and a headgear with a red star, symbolizing that he is the leader.
He used to be a competent officer of the Keron Invasion Army, but he slowly lost his interest with the Earth invasion. Keroro grew lazy and negligent, usually procrastinating and leaving all his paperwork to the last minute. Whenever spared from household chores, he loves to spend his time (and his platoon’s budget) on making Gundam models, watching anime, or reading manga. He does occasionally plan to invade Earth, but ends up failing miserably.

Giroro
Giroro is ranked corporal of the Keroro Platoon, and is their weapon expert. His skin is dark red, wears a belt with a rectangular buckle and maroon headgear with a skull symbol.
During his first arrival at the Hinata household, all the traps that Giroro has set was defeated by Natsumi, causing him to fall in love with the latter. He is easily angered and irritated by his comrade’s lack of focus on their invasion, especially Keroro. Despite his gruff demeanor, Giroro possesses a kind and loving heart.
He lives in a tent at the Hinata household’s backyard, together with a pink cat she named Miss Furbottom. Whenever not occupied by his missions, Giroro likes to spend his time cleaning weapons.

Tamama
Still having his tadpole tail, youngest in the Keroro Platoon, Tamama is ranked Private Second Class. He has a dark blue skin, a white face, large round eyes, and a symbol on his belly that symbolizes inexperience.
While usually kind and harmless, Tamama can sometimes become sinister in a snap. He is prone to be jealous of Mois, due to her relationship with Keroro, who he greatly idolizes. He trains relentlessly, usually beating up a wooden target resembling Mois, with hopes that he might win Keroro’s affection. He can release an energy beam from his mouth, usually powered by his negative thoughts about Mois.

Kururu
Responsible for communications of the Keroro Platoon is the antagonist-like Sergeant Major Kururu. He has a yellow skin, an orange headgear, and a spiral mark symbol on his belly and eyeglasses.
Mysterious, deceitful, and possessing a habit to snicker when he talks, Kururu mostly gives off a very negative and sinister aura. This is the reason why he was not designated commander of the platoon, despite being a rank higher than Keroro. He is generally disliked, evident from the low sales of his action figures back at Keron. However, he is an extremely skilled inventor. Unlike the other platoon members who rely on brute force, Kururu excels in technology, and is responsible for the technological gadgets of the platoon.

Dororo
Initially known as Zeroro, he graduated from the Keron Military Academy and was awarded with the rank of Lance Corporal. After being saved by a ninja trainee Koyuki Azumaya at his crash site, Zeroro decided to follow the path of a ninja, and donned the name Dororo.
Since then, he came to treasure life and nature, and swore to protect Earth’s peace which he came to enjoy. His abandonment of Keroro Platoon’s mission put him at odds with his comrades at first, but they were later reunited. Despite his calm and meek demeanor, Dororo’s ninja skills are unparalleled. Whenever he is not training, he likes to spend his time by reading, or spying on the Keroro Platoon’s members.

Story: Produced by the same studio responsible for Gintama, you can expect crazy and hilarious randomness while watching Keroro Gunsuo. Made in a sitcom format, the episodes end without greatly pushing the plotline forward, and litters the show with comedy instead. The show uses many references involving anime, sports, politics, and just about everything we encounter in everyday life.
Characters: What makes the series even funnier is its diverse set of characters. The characters are unique, and are written in a way that they are different from most anime. Their different personalities are absolutely lovable, and overall you would just enjoy them.
Animation: Although not being extremely detailed or fancy, the simple and fluid animation is perfect for the show’s genre.
Sound: Similar to the animation, the sounds that the series use may not stand out. Nonetheless, it does its job well.
If you want to take a break from anime with serious themes and would like to goof around, then Keroro Gunsuo is the show for you. Each episode will absolutely tickle your humor, and will leave you with teary eyes from laughter.