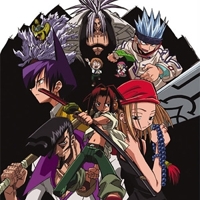 Once in every five hundred years, the Shaman Fight Tournament is held, a battle between Shamans where the winner will be crowned Shaman King and granted the power to shape the world.

The story follows Yoh Asakura, a care-free and lazy shaman who is isolated in their town due to his supernatural abilities. After learning about the Shaman Fight, Yoh decides to compete with the help of his fiancée Anna, who prescribes him a merciless training regimen.

However, the road to become Shaman King is not as easy as Yoh imagined. He must now prepare to fight Hao, his powerful evil twin who desires to eradicate humanity and the human world.

Shaman King is an anime adaptation of the action-adventure manga series under the same name, written and illustrated by Hiroyuki Takei. Produced by studio Xebec, the series aired a total of 64 episodes between July 4, 2001 and September 25, 2002.

Yoh Asakura (Main Protagonist)
Descendent of the spiritually powerful Asakura family, Yoh Asukara is a young man who is aiming to become Shaman King. He has the ability to see spirits, a talent that led him to be friends with Manta. Yoh is lazy and care-free most of the time, and often slacks off with his training. He is motivated to train whenever he remembers his promise to Anna – his fiancée – that he will grant her an easy life after he becomes Shaman King.

Anna Kyouyama
After being abandoned by her parents due to her strange abilities, Anna Kyouyama was adopted by Yoh’s grandmother, and was made her apprentice. She has the ability to summon spirits and channel their energy, even spirits that are from heaven. Itakos like her are usually blind, but Anna is fully sighted, and is immensely powerful. She is Yoh’s fiancée and deeply cares for him, despite her merciless treatment of him especially during his training.

Manta Oyamada
Notably intelligent, Manta Oyamada is the first person who has ever tried to understand Yoh’s abilities and befriend him. He also has the ability to see spirits, but cannot manipulate his spiritual energy like Yoh and Anna. Being not able to directly help his friends in battle, he observes their fights or support them financially with his immense wealth instead. Manta’s family disapprove of his relationship with Yoh, but he does not mind and continues to faithfully stand by his best friend.

Hao Asakura
Second reincarnation of the founder of Asakura family, Hao Asakura is the strongest participant in the Shaman King tournament, and is Yoh twin brother. Despite being defeated twice during his previous lives, he is so powerful that he managed to reincarnate without losing his knowledge or memories. Most of his enemies fear his ruthless nature, but Hao sometimes display a care-free attitude similar to his twin Yoh. He desires to become Shaman King to avenge her mother’s death.

After helping the samurai spirit’s tormented soul, Amidamaru agrees to become Yoh’s guardian spirit, and defeats Ryu, a gang leader that vandals the local cemetery’s gravestones. Yoh’s fiancée, Anna Kyouyama, decides to train Yoh after his bare win against Ren, and to prepare him for the Shaman Fight that is soon to come.

Horohoro becomes Yoh’s new ally, after he was assisted in retrieving his valuables and given residency at Yoh’s home. Later, Amidamaru is confronted by Tokageroh, who held Manta and Ryu as his hostage. Tokageroh then possesses Ryu’s body and steals the Harusame from the museum where it was kept. Left with little choice, Yoh and Amidamaru destroy Harusame – Amidamaru’s priced sword – in order to weaken Tokageroh. Tokageroh does immediately give up, and threatens to kill Ryu, who passes out after not being able to sustain the strain in his body. Yoh decides to let Tokageroh possess him instead, and finally stops him.

Later, Anna summons Mosuke’s spirit to reforge the Harusame. As a result, a new weapon is created – the spiritual Harusame – generated by Yoh’s spiritual power. He uses his new weapon to defeat Shikigamis sent by his father, Mikihisa Asakura. Later, Ragou, the star that signals the commencement of the Shaman tournament, descends from the sky.

Story: Shaman King’s story is well paced and developed. Most things made sense and the way Hao’s terror was slowly arriving was simply beautiful. Various interesting conflicts emerged in the series, and all of them were satisfyingly solved towards the end of the show. The comedy also balances out the intense action scenes.
Character: Surely, an excellent story can never be written without a good set of characters. Shaman King does not disappoint in this aspect, introducing many unique characters that have their own problems and ideals. Everyone creates interesting interactions, and they all work excellently within the story. The characters also have rich background stories, making them even more lovable and interesting.
Animation: One aspect that held Shaman King from becoming an outstanding series is its animation. While the character and spirit designs may suffice, there are a lot of still frames and the action scenes were not fluid enough.
Sound: While not being particularly notable, the sounds did a good job. The voice acting was spot on, giving life to each character that appeared in the series. Depending on your taste, the opening and closing music theme is catchy, and might stick in your head for quite some time.
Overall, if you like watching shows that are about friendship, determination, revenge, hope, love, and hilarious comedy, Shaman King might be worth a try.