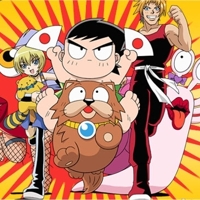 Papuwa is back !It’s been already 4 years since Papuwa and Chappi left the first Papuwa Island somewhere in the South Pacific…

Kotaro, the brother of the big boss of the gang called “Gamma”, is woke up from his long sleep by the call of “Blue Jewel”, and sneaks out of the headquarters of “Gamma” to the sea.

Being swallowed by the big whirling waves, he is swept to a strange island and found by Papuwa, Chappy and Liquid. This island turns out to be the second Papuwa Island !!

While Kotaro is amnesiac, Liquid renames him “Rotaro” and tries to keep him in such condition because Liquid knows that Kotaro is the one who actually destroyed the first Papuwa Island and fears that he regains all his memories some day…

Coming through a series of hilarious events and adventures on the island, Kotaro gradually makes friends with Papuwa, Liquid and other strange inhabitants such as Ito-kun and Tanno-kun.

But be careful ! Members of “Gamma” are storming the island to get Kotaro back with them…