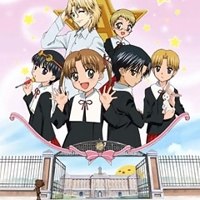 Innocent, playful, and energetic, Mikan Sakura is a normal 10-year old girl living with her grandfather in a peaceful town at the countryside. She shares a sister-like relationship with her best friend Hotaru Imai, and they often quarrel due to their opposing personalities. One day, Hotaru transfers to a faraway academy in Tokyo, which devastates Mikan. After 6 months have passed and only receiving one letter from her best friend, Mikan decides to leave their town and visit Hotaru.

After arriving at Hotaru’s school, Mikan discovers that it was a special institution meant for people with supernatural abilities called an “Alice”. There, the students are protected and trained on how to use their Alices better. Upon discovering that she too has an Alice of her own, Mikan decides to enroll in the academy. Eventually, she and Hotaru are reunited.
The story follows Mikan and Hotaru’s adventure inside the academy, and their silly encounters with a mysterious student named Natsume Hyuuga.

Gakuen Alice, also known as Alice Academy, is an anime adaptation of the comedy, fantasy manga series under the same name, written and illustrated by Tachibana Higuchi. Produced by studio Aniplex and Group TAC, the series aired a total of 26 episodes between October 30, 2004 and May 14, 2005.

Mikan Sakura (Main Protagonist)
Mikan Sakura is an outgoing and cheerful 10-year old, who initially lived with her grandfather at the countryside before running away and studying at the Alice Academy. After discovering that she too possessed an Alice, she was enrolled at the academy, without knowing what her Alice actually was. This caused initial doubt and distrust among her classmates and teachers, but was soon accepted due to her friendly and positive demeanor.

Hotaru Imai
Generally opposite in attitude with her best friend Mikan, Hotaru Imai is rude and lazy, but is extremely intelligent and rational at the same time. She possesses the Invention Alice, which allows her to create innovative gadgets that she sells to her clients worldwide. She even sells embarrassing photos of her classmates, in order to obtain funds for her projects. Despite her cold demeanor, Hotaru cares deeply for her friends in her own way.

Natsume Hyuuga
Closely similar to Hotaru is Natsume Hyuuga, a silent and mysterious student that Mikan met during her first day at the academy. Feared and hated by most of his classmates and teachers, Natsume possesses the Fire Alice and a rebellious attitude. He ditches his classes most of the time, but is actually smart and is the only one who has the Special Star in the Elementary Branch.

Ruka Nogi
Ruka Nogi is half French half Japanese, and is Natsume’s warm, pleasant, and loyal best friend. He and Natsume enrolled together at Alice Academy, after Natsume was falsely accused of setting their town on fire. He tries to defend Natsume whenever he can.

After arriving at the Alice Academy, Mikan meets Narumi, who told her that she also possessed an Alice. Right before Narumi revealed what Mikan’s Alice was, a student wearing a black cat mask destroys the school wall. Narumi knocks out the student, who was apparently Natsume Hyuuga, and brought him to the Elementary Principle together with Mikan. Later, Mikan was suddenly held down by Natsume, and threatened to burn her hair if she did not tell him who she was. Natsume reveals Mikan’s skirt before leaving to taunt her. Narumi cheers Mikan up by bringing her new uniform, and reuniting her with her best friend Hotaru.
After several aggressive encounters with Natsume, Mikan discovers that she possesses the Nullification Alice, and is placed in the Special Ability Class. There, for the first time, Mikan is welcomed by her classmates.

Later, Mikan discovers that they are forbidden to have any contact with anyone outside the academy, after discovering that Natsume has not sent her letters for her grandfather. Mikan forgives him however, and Natsume promises that someday she will be able to contact her grandfather. Mikan then focuses her time more on her Alice, and was helped by her teacher who had the ability to travel to the past. After some time, Mikan finally manages to control her Alice, and stop her teacher from travelling to the past.

During the Alice Festival, Natsume is abducted by Reo. After an intense rescue attempt, Mikan helps Natsume escape from Reo and his men, and is awarded with One Star for her bravery. After the incident, everyone’s attention is once again focused on enjoying the Alice Festival. During this time, the students developed their relationships with their fellow schoolmates.

The semester exams arrive after the successful Alice Festival. Mikan studies with her best after learning that the student who gets the highest score will be awarded with one week of visit to her/his respective family. This ignites a studying competition between her and her friends.
Reo returns for Natsume, disguising as a performer during a circus inside the Alice Academy. After tricking Ruka in believing that Natsume’s Alice is being abused by the academy during his secret missions, Ruka goes berserk and causes chaos during the circus. Ruka refuses to listen to his friends’ explanations and continue to control the animals and rampage inside the academy. Finally, Natsume manages to calm Ruka down by slapping his face, and peace is restored. Narumi confronts Reo, and they both end up forgiving each other.

After the circus incident comes the graduation. Mikan learns that she failed the semester exams, and will have to retake them. She also learns that Hotaru is planning to leave again for a project overseas. Mikan confides with Natsume, who says that he will allow Ruka to leave if he wished to, because that is his own decision. With this, Mikan decides to let Hotaru go. Mikan’s classmates notice that she is still bothered and sad, so they set out to stall Hotaru, so that Mikan might be able to say her goodbyes after taking her final exam. Later, it is revealed that Hotaru is not going overseas, but is just simply transferring dormitories. This overjoys Mikan, and expresses that she loves Alice Academy.