The Way of the Househusband [TV] 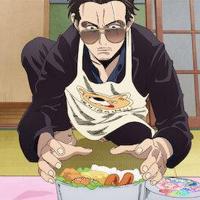 Tatsu, an infamous and feared yakuza boss nicknamed “the Immortal Dragon”, retires from crime to become a househusband so that he can support Miku, his kyariaūman wife. The episodic series depicts a variety of comedic scenarios, typically wherein Tatsu’s banal domestic work as a househusband is juxtaposed against his intimidating personality and appearance, and his frequent run-ins with former yakuza associates and rivals.