For Whom The Alchemist Exists [Movie] 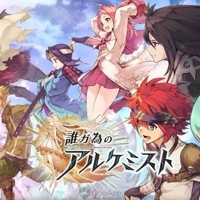 In Ta ga Tame no Alchemist, the anime film based on the mobile game of the same name, we follow the high school student Kasumi Nagasaka, who one day finds herself transported into a completely different world. Here she lands on the continent of Babel, whose landmark, the Great Tower of Babel, looms menacingly over the seven nations there. After the inhabitants of Babel empowered themselves in alchemy and explored its secrets further and further, it didn’t take long until the idea was born to turn this powerful technology into a weapon—a weapon that would drive mankind to the brink of destruction in the ensuing war. So that such a tragedy would never happen again, the seven nations made an unstable peace, which also led to the international prohibition of alchemy. But after centuries of peace, the tranquility would come to an end in the Continental Year 911, when the nation of Lustrice once again created an army strengthened by the power of alchemy. However, an alliance of the remaining six nations under Envylia’s leadership struck down the traitors of Lustrice.

Since then, 20 years have passed and again dark clouds rise over Babel … Kasumi has only just arrived here when renegade alchemists once again bring chaos to the land …!