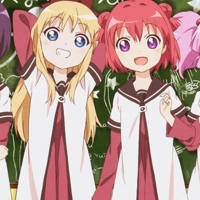 YuruYuri (ゆるゆり, lit. “Easygoing Yuri”) is a Japanese manga series written and illustrated by Namori. The series began serialization in Ichijinsha’s Comic Yuri Hime S magazine from June 12, 2008, before being moved over to Comic Yuri Hime in September 2010. An anime adaptation by Doga Kobo aired in Japan between July and September 2011, with a second season airing between July and September 2012. An original video animation by TYO Animations was released on February 18, 2015, followed by two TV specials which aired in August and September 2015. A third TV season by TYO Animations aired between October and December 2015. Another OVA by Lay-duce, announced to celebrate the manga’s tenth anniversary, was released in November 13, 2019. A spin-off original net animation titled Miniyuri by DMM.futureworks and W-Toon Studio premiered on YouTube on September 25, 2019. A spin-off web manga, Ohmuroke (大室家 Ōmuroke), began release on Nico Nico Seiga in July 2012.