Recovery of an MMO Junkie [TV] 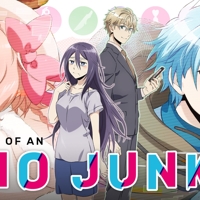 Recovery of an MMO Junkie (Japanese: ネト充のススメ Hepburn: Net-juu no Susume, subtitled “Recommendation of the Wonderful Virtual Life”) is a Japanese manga series by Rin Kokuyō released as a webtoon on the Comico app. An anime television series adaptation directed by Kazuyoshi Yaginuma and animated by Signal.MD aired from October to December 2017.